Every day, the US government creates and consumes significant amounts of data. Federal agencies are finally riding the wave of Big Data Analytics for solving problems such as improving citizen service. Domestic tranquility, customer satisfaction, transparency, and providing quality service are among the many critical goals that most government agencies aim to achieve through citizen service. Federal, State, County, and City governments are constantly challenged by the overwhelming number of service requests from citizens, organizations, scholars, the media, and many other entities. Governments, however, are constantly facing accountability issues that can call into question their role and efficiency. This paper, through the use of data science and context, introduces a novel engine that could be used at any federal agency to improve citizen service, evaluate performance metrics, and provide pointers to enhance satisfaction rates. The model used in the engine (called iGPS) is deployed through a number of real-world citizen’s complaints datasets. Insightful and actionable data visualizations are introduced to federal employees depending on their context. - The goal is to aid them in decision-making. The model is tested for the first time (through six governmental datasets from 46 agencies), machine learning models are developed, visualizations are built, the system is deployed at the US government, and experimental results are recorded and presented.

Reducing energy consumption is an individual and collective challenge that requires people to be proactive and fully involved. However, most approaches and solutions to this problem promote automated and autonomous systems that take full control of the decisions. Although these systems relieve users from setting the temperature in offices and homes, the level of thermal comfort chosen by the technology may not meet the individuals’ requirements. Automating control is an obvious solution but it keeps the human out of the loop. In this paper, an alternative approach is promoted based on system–human cooperation that allows people to make the final decision. However, to make sound decisions, users need to understand the system functioning and rationale and they need to be convinced and motivated to change their habits with regard to energy consumption. Our approach is based on an e-coach system, called Involved, which provides users with contextual explanations along with a user interface designed to persuade the user to stay involved. The results of this research are the development of an early prototype that provides end-users with a 24-hour plan of recommended actions along with contextual explanations that justify each action. This plan satisfies the inhabitant’s preferred compromise between the thermal comfort, air quality and financial cost specified by the inhabitant (i.e. the user) using a novel interaction technique, the Trade-Off-Pareto sliders. Users can edit the plan (e.g. suppress an action), skip some actions, perform additional actions, or even change their preferred compromise, and be informed in real time of the consequences on energy consumption and comfort.


Supporting context on software applications: a survey on context engineering


Epistemological Contextualism from a Logical Point of View

This paper aims at presenting a logical framework capable of expressing epistemological contextualism. Epistemological contextualism relies upon the possibility of an indexical interpretation of the knowledge operator, according to which the truth conditions of knowledge attributions exhibit a contextual variability in such a way that knowledge in one context does not entail knowledge in every context. By means of a notion of epistemic context defined on the basis of the notion of context developed by McCarthy and Buvaˇc in artificial intelligence, I show how an indexical interpretation of the knowledge operator can be formally modeled through a natural deduction system that enables classical reasoning among contexts governed by different concepts of knowledge.

This article presents and evaluates a novel contextual approach called the Cooperating Context Method that can serve to synthesize complete narratives that are interesting and make sense to the human reader/listener. Exis-ting context-driven approaches are generally designed to facilitate the situational awareness of a tactical agent that ope-rates in an interactive world environment (whether physical or virtual). Such agents are generally tasked with making de-cisions in pursuit of their objectives and/or in light of the environment and the actions of other entities in the environment. In effect, these agents live mainly in the present and/or to a much lesser degree, can remember things from the past; they only relate to the future in terms of making plans to achieve their objectives, if any. These existing context-centric ap-proaches are not useful for the creation of a narrative which, by definition, is neither in the past nor the present, but rather in an artificial time frame that covers an arbitrarily long time period. CCM was designed and built to overcome the limita-tions found in other contextual approaches with respect to automated narrative generation. CCM begins to build the nar-rative by examining the current situation to create a list of tasks that are relevant to the situation being faced by the agent. Through a series of algorithms, the list of contexts that are able to perform these tasks is narrowed down to two lists of high priority and low priority contexts, while removing those other contexts deemed irrelevant to the current needs. The set of contexts best suited to manage the tasks are selected and the contextual knowledge is utilized to address the rele-vant tasks. All along this process, the contexts activated and actions taken by all agents (i.e., the characters in the story) are recorded and become part of the emerging narrative. Potential applications of CCM and its ability to build complete narratives include automated story generation, building scenarios for first person shooter video games, and creating si-mulated scenarios for tactical training in first-responder operations and in military operations. The application described in this paper is for automated generation of children’s stories. Extensive testing of CCM revealed that it performs as it was intended.

The Contextual-Graph (CxG) formalism allows the representation of a task realization by an actor. The objective is to provide decision makers with a clear panorama of the different ways to realize a task (i.e. the practices), and thus of the implications of choosing one alternative or another. The Contextual-Graph formalism has been successfully used in many fields, such as medicine, biology, and transportation. In this paper, we extend the formalism to modeling group activity, and illustrate its extensions on a real-world application called the TACTIC project. The extensions concern the introduction of (1) simulation parameters for managing the interactions among the actors, (2) the notion of turn for representing a traversal of the contextual meta-graph (the model of the group activity), (3) a turn mechanism for incorporating the cyclic use of the contextual meta-graph, and (4) a CxG-based simulator for studying interaction among group members. A real understanding of group activity does not just help decision makers, but also provides real requirements for building successful applications.

This paper compares the contextualization and linguistic realization of contrastive discourse relations in monadic and dyadic editing tasks produced in an experimental setting. Participants were asked to produce a well-formed argumentative text based on a skeleton text reduced to minimal propositional information while still containing the original argumentative sequential organization and default configuration of events. The goal was to understand the role of context in the production and processing of discourse against the background of the negotiation of discourse common ground and construal of discourse coherence. Context is conceived of as a dynamic relational construct, comprising social context, linguistic context (or: co-text) and cognitive context. The study is methodologically compositional across functional approaches to discourse grammar, discourse representation, and discourse pragmatics. The results of the experiment show that dyadic and monadic texts contextualize contrastive discourse relations and construe discourse coherence by utilizing a pool of contrastive discourse connectives and coherence strands, with monadic texts additionally entextualising social context, embedding contrastive contributions accordingly.

This programmatic paper is an attempt to connect some worries in the philosophy of language with some traditional views in artificial intelligence. After a short introduction to the notion of context in philosophy (§1), starting from the inventor of mathematical logic, Gottlob Frege, I list three debates in the philosophy of language where the solution is strongly undecided: §2 treats the debate between holism and molecularism; §3 describes the debate on the boundaries between semantics and pragmatics; §4 hints at a solution of the debate between explicit and implicit view of incomplete descriptions. These debates may be considered case studies on what is happening to the notion of context in philosophy in the first two decades of XXI century; they push us to look for a unifying framework in which to frame those worries: I propose to shift the attention towards a representation of the basic abilities required to navigate across contexts (§5). In the conclusion, I use some suggestions from computer sciences as a contribution towards a better definition of what is meant by “pragmatic competence”, strictly connected to the philosophical enterprise (§6).

Specifying the search space is an important step in designing multimedia annotation systems. With the large amount of data available from sensors and web services, context-aware approaches for pruning search spaces are becoming increasingly common. In these approaches, the search space is limited by the contextual information obtained from a fixed set of sources. For example, a system for tagging faces in photos might rely on a static list of candidates obtained from the photo owner’s Facebook profile. These contextual sources can get extremely large, which leads to lower accuracy in the annotation problem. We present our novel Context Discovery Algorithm, a technique to progressively discover the most relevant search space from a dynamic set of context sources. This allows us to reap the benefits of context, while keeping the size of the search space within bounds. As a concrete application for our approach, we present a simple photo management application, which tags faces of people in a user’s personal photos. We empirically study the role of our framework in the face tagging application to tag photos taken at real world events, such as conferences, weddings or social gatherings. Our results show that the availability of event context, and its dynamic discovery, can produce 97.5% smaller search spaces with at least 93% correct tags. 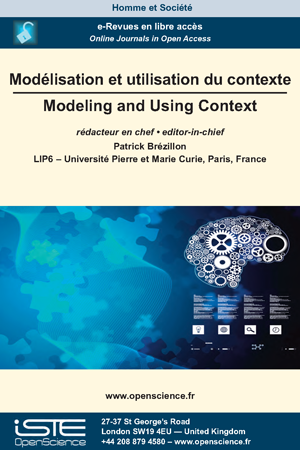