What is making into play? The design of a playful application based on a cartoon.

During a research on the conception of a cultural product intended for the children (a comic strip and the cartoon which was adapted from it), we studied an application derived from the same universe, promotional tool ordered by the co-producing television channel. We analyzed the place of the action proposed to the child through various devices considered as interactive, including the game, as well as the discourses produced by the designers. Despite the central place given to it, the game is only a limited element of a logic of participation of the child in the universe in order to capture him. The game appears as a parenthesis that must not call into question the logic of the cartoon that largely guides the development of the application. It appears as a different way of viewing a cartoon. Beyond this example, it is a question of showing the tension between the content of the game and what makes the game a game, the relationship that we maintain with the content. The fixation on the content leads to limiting the dimension of the game itself.

Les Éonautes is a learning game developed for learning French as a foreign language (FLE) and released in 2012. It is probably the first video game to have been produced specifically for FLE, and is one of the very first video games for language learning. But it failed to meet the market, and the discontinuation by Adobe of the Flash technology, on which the animations are based, led to its interruption in April 2020. The purpose of this article is to provide feedback on this game, highlight its innovations, and analyze the reasons of the commercial failure.


The video game, a convenient valve for human anxiety or a weapon for escaping from the cage?

Increasingly used in history class, the Assassin’s Creed series of video games makes the player embody a hero opposing the dictatorial aims of an occult group, at various times. To situate the game’s relationship to history, we interviewed 12 historians who were consulted to create these games, to explore their perceptions of the games’ content and their potential effects on players. The believable appearance of the game seems to them to carry the risk of bolstering its outlandish premise and supporting causal attribution based on the big characters. Some, however, also see it as an opportunity to develop critical thinking.


What are players saying about learning history with Assassin’s Creed? Between authenticity and historical learning

This exploratory study provides an analysis of public forums about the Assassin’s Creed series and its representation of the past. The data indicate two trends marked by discussions firstly on the quest for the historical authenticity and secondly on learning with such a video game. We propose to sift these discussions through epistemological stances in order to identify a typology of player-types who could engage through a process of investigation and historical problematization in a differentiated way.


(Re)thinking the integration of (video) games in the school situation. Some ideas in perspective.

The practice of video games is increasingly popular among young people and in society. In fact, video games represent the largest cultural industry in the world, followed by music and cinema. However, they are still rarely used in the classroom. This article proposes to identify teachers’ motivations and obstacles they may encounter when using video games at school. For this purpose, we interviewed 34 teachers and future teachers from primary and secondary schools in order to address the following question : does the teacher’s personal experience with video games influence their integration in the classroom ? An online survey revealed that the majority of teachers were motivated by the idea of using video games, but under certain conditions. Indeed, we highlighted a certain number of requirements for implementing video games in the classroom, such as a training program with the possibility of playing different types of video games, guidance regarding classroom management and technical support (material, etc.). This article also shows that teachers’ personal experience positively influences the use of video games in the classroom, even though it is not sufficient to motivate them to use these games for educational purposes.


Game-Oriented Learning in Business School: The Case of the EdUTeam Project

In the early 2010s, the Association Information et Management (AIM) created a research group on serious games in order to support practitioners in the implementation of these tools in management sciences. A decade later, Game-Oriented Learning, which is protean, has become widely used in Business Schools. The work carried out at the Institut de Recherche en Gestion (IRG, EA 2354) within the international research group MACCA Management has identified nine Game-Oriented Learning techniques implemented by teachers and trainers. The team of the EdUTeam Game-Oriented Learning research and pedagogy project then set about studying more precisely the detour of leisure games (serious gaming) in order to evaluate their capacity to support pedagogical scenarios covering complete courses without reducing academic expectations. The results from this Action Research, which are particularly encouraging, show that despite the offset between universes (fictional or historically distant), certain games allow the design of experiential courses guaranteeing an epistemic isomorphism between learning situations and professional reference situations, reducing the pedagogical, cognitive and organizational routines that can inhibit student learning.

In this paper we explore the concept of "ludopédagogie", through a sociological approach and content analysis in order to understand its current use and meaning. To this purpose, after clarifying our position in terms of research upon game, we are using the outcomes of a search on the French speaking web in order to identify the actors who use it. These mainly come from the world of vocational training for companies. There is a current extension of the use of the concept by new actors, especially academics, who are considering its use in education. Finally, we analyze the ideology that emerges from the analysis of the contents. This highlights the belief in the motivating power of play, a confusion between playful pedagogy and active pedagogy, the promotion of action against theoretical knowledge. 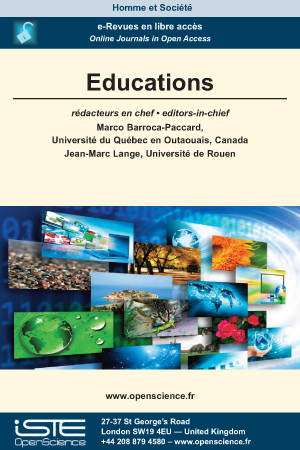