Issues and Challenges of the Internet of Things (IoT)

In this paper, we present: 1) the concepts of the Internet of things (IoT), 2) the data as a source of value creation, 3) the socio-economic challenges of IoT, 3) The challenges for companies and researchers, 5) and the last part has as objective to describe the themes of the review of the internet of objects (IoT).

We propose a brief look of what could be an (open) set of problems and researches constructed from the field of SHS and aimed at the multiple dynamics of the digital folding of the current world and within the framework of the Internet of the Objects. At the same time, we point to a few markers to the extent of bio-technical and bio-political evolution by non-organic means, which is at the heart of the “artificialization of the world” as well as the extension of robotic and automation processes. We also show the effects that the Internet of the Objects has on our “milieux of intelligence” as well as its increasingly strong coupling with the transformation of the urbanization process. This artificialization of urban environments goes hand in hand with the emergence of the global consumerist middle class. Moreover, radically new social physics and biosociality (associated with Big Data) tend to converge more and more explicitly. This opens up a vast field of reflection and raises many problems. The Internet of the Objects expresses the depth and the uncertain character of the anthropological and collective evolution that is now actualizing.

In this paper, we present a platform for continuously monitoring and guiding post-stroke patients at home during their daily activities. The platform consists of a smart cup that carries sensors to monitor the arm and hand activity during the day. The cup detects its orientation, the water level, its position relative to a specific target as well as the hand tremors. In addition, display can guide the patient in his movements. We also present two planned clinical studies with therapists and patients.


Multi‐standard transceiver for the Internet of Medical Things


The transitions of smartphone positions what consequences on the recognition of the human activities?

This paper presents an experiment that shows the impact of the transitions of smartphone positions (from one position to another on the human body) on the recognition of the human activity, in an uncontrolled environment. The studied activities are walking, laying, standing and sitting. In this environment, users are free to switch smartphone position, for instance from hand to pocket. Our methodology includes the combination of different sensors and a classification with a Deep Neural Network algorithm. Two datasets were considered, the only difference between the two datasets is that the transition are removed in the second dataset. Results show an improvement of accuracy of the classification of activities 93.87% for the control dataset compare to 95.07% for the dataset with removed transitions. We also show that with no transitions the convergence is quicker and more robust. Consequently, our method including removing information corresponding to transitions should save memory space and computing time while offering a high classification precision.

In order to be able to deploy the various solutions for the Device Layer of the Internet of Things, these proposals must be evaluated in terms of performance, scalability and repeatability. This paper introduces our test platform which was designed to be able to support these types of tests. We describe the wireless nodes which make up the test platform and present a selection of use cases.

First, the paper presents some definitions of vehicle networks, application areas, communication technologies and barriers that disrupt communications and deteriorate quality of service (QoS) in the Internet of Vehicles (IoV). Then, it introduces our proposition aiming to detect and bypass disconnection zones through a new routing protocol based on i) the estimation of the contact time between a vehicle and its neighbors, ii) the data load to be transferred and (iii) logs of communication errors. The objective is to ensure the availability, the reliability and the robustness of inter-vehicle communications by taking these three criteria into account in a data routing algorithm. 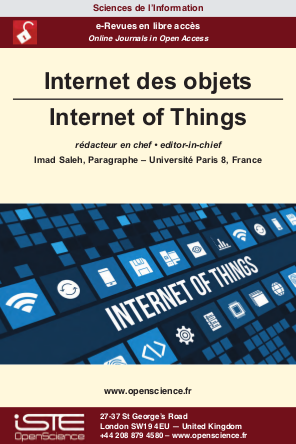